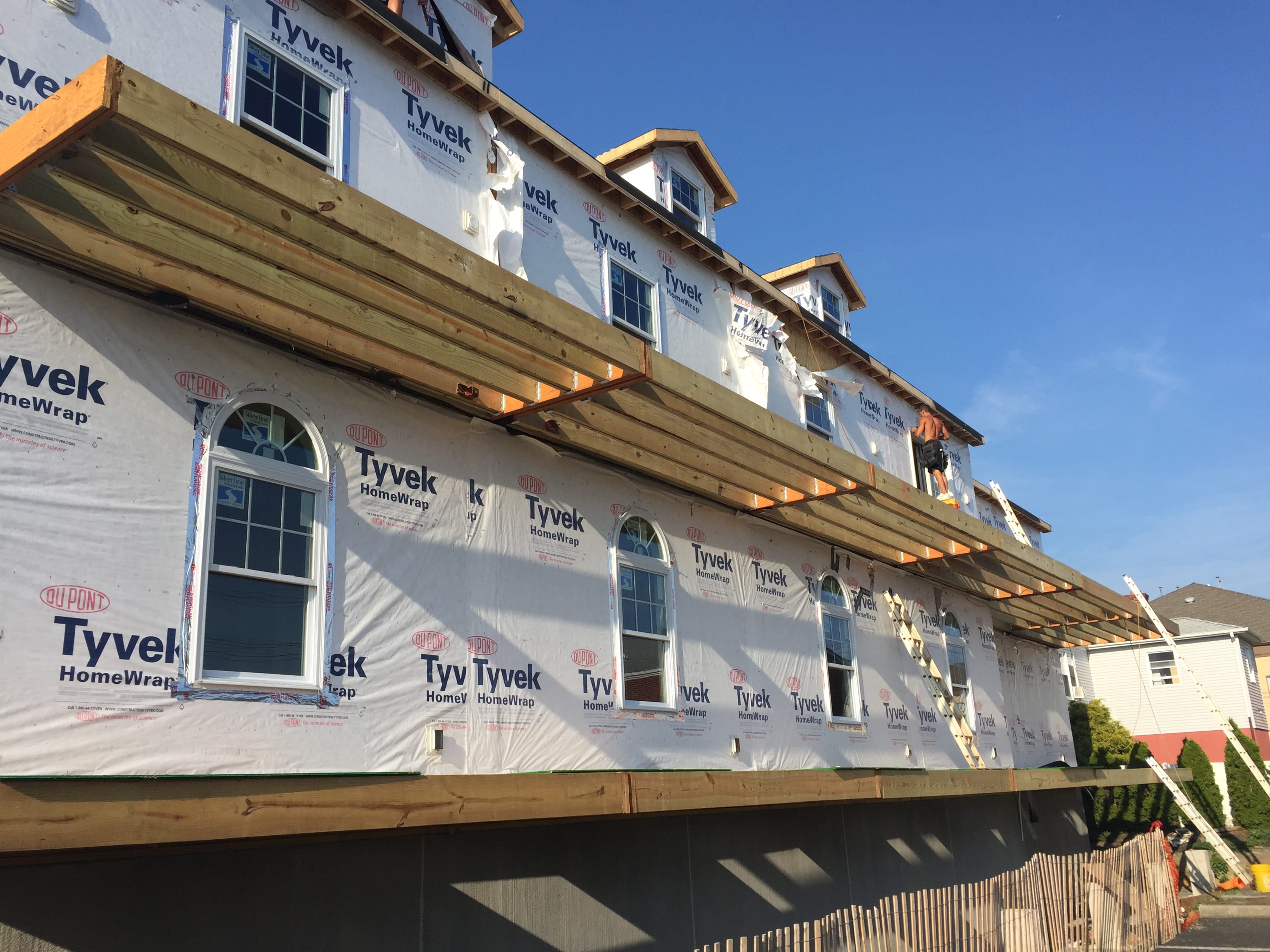 Belmar, NJ (August 7, 2016) – Zarrilli Homes, New Jersey’s premier custom modular home builder, is pleased to announce the future home of the Friendly Sons of the Shillelagh of the Jersey Shore has been set and is one step closer to completion. The 6,400-square-foot modular building was set over three days from July 26th to the 28th at the organization’s 16th Avenue site in Belmar with Zarrilli Homes serving as lead general contractor. The new club building is expected to be 100-percent completed and ready for use in late fall.

The upgraded club will feature two stories, a 3,200-square-foot basement, a significantly larger event space, upstairs and downstairs bar areas, an elevator, a commercial kitchen and over 1,200 square feet of deck and porch space.

Zarrilli has agreed to leave the existing building up until the new one is finished, so that the club can avoid having to close. The new building presently occupies the parking area behind the existing club. The structure that currently houses the club will be torn down and replaced with a brand new parking lot, which will be larger and located in the front of the building.

“Zarrilli hung in there with us throughout the process,” said Project Coordinator and Former Friendly Sons of the Shillelagh of the Jersey Shore Chapter President John Carr. He explained that there were some periods of downtime, which included variations and changes to the design. “Anthony was very patient and knowledgeable and helped to answer questions as well as offer suggestions. He made it a good experience.”

“All club members have been instrumental in the design, commencement and future completion of this project, and they have been great to work with,” said Zarrilli Homes Founder/President and Friendly Sons of the Shillelagh member Anthony Zarrilli, who has been involved since the planning process began three years ago.

In fact, some club members can be seen working onsite as the project progresses. According to Friendly Sons of the Shillelagh of the Jersey Shore Chapter President Steve Roberts, being given the opportunity to utilize the skills of the non-profit organization’s members will help to maximize the money being spent on the project and save on some of the costs.

Roberts explained that the larger event space will allow the club to host additional functions and accommodate more attendees. He said that the organization holds a number of fundraising events throughout the year, which benefit local charities and area families in need. With the increased space, not only will the club be able to have more of these fundraising events, but more people will be able to attend them.

He noted that the Jersey Shore Chapter just celebrated its 25th anniversary in June and that the Friendly Sons of the Shillelagh is considered one of the largest volunteer organizations in the State of New Jersey with over 1,000 members. “Our membership has increased so much that we outgrew the building,” said Roberts of the decision to upgrade. “Now we will be able to take on more members and help out more people in the community.”

Members of the club decided to go with modular because of the efficiency, design capabilities, speed, quality and cost that modular offers. According to Roberts, the club chose Zarrilli Homes because of the company’s stellar reputation in the Monmouth and Ocean County area. “The building is quite large for being a modular,” Roberts noted. “It put our mind at ease to know we are working with a company that has been around for a long time and is so highly regarded.”

“The scope of this project and the amount of work that has gone into this is incredible. The level of service and attention to detail has been amazing, and Anthony and his crew have been great to work with,” said Roberts.

“Working with John Carr and the entire board has been a pleasure,” noted Zarrilli.

In addition to the Friendly Sons of the Shillelagh, the Zarrilli team is proud to support a number of other local non-profit organizations, such as the Brick Children’s Community Theatre, which recently put on a production of The Little Mermaid at The Strand Theatre.
To learn more about Zarrilli Homes, visit Zarrillihomes.com. Zarrilli Homes is located at 186 Mantoloking Road in Brick. Call 732-262-4848 today and make an appointment to visit Zarrilli’s custom design center. To Find out more about the Friendly Sons of the Shillelagh of the Jersey Shore, visit FSOSBelmar.org.