From factory to foundation, modular homes are now built to last
Written by: Mike Schoch
Produced by: Ian Nichols 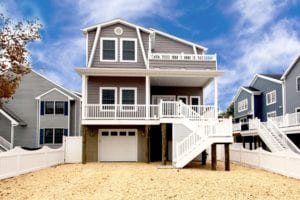 Review: March 20, 2017: After stumbling across an article about modular homes, third-generation homebuilder, Anthony Zarrilli, recalls showing it to his father. The elder Zarrilli scoffed, labeling modular houses cheap and flimsy.

Zarrilli grew up learning the finer points of traditional building from his dad and remembers scouring the job site for loose nails as a five year-old. However, though he respected his father’s opinion, he wanted to learn more, so he ordered a modular kit and built a home by himself—in a blizzard. The experience taught him contemporary modular units could be built quickly, affordably and in any environment.

U.S. News cites a report that 14,000 modular homes were built in 2014, the majority of them in the Northeast, where harsh weather can prolong construction and raise labor costs. Built in the climate-controlled confines of a factory, their appeal makes sense.

Zarrilli says his building process includes drawing up a design with clients and sending the plans to the modular factory, where engineers and carpenters build a series of separate sections—or “modules”—on an assembly line. As they’re finished, these pieces are delivered to the job site, where they are fastened to the foundation.

Zarrilli is so passionate about modular technology that he’ll take busloads of prospective clients on field trips to the factories.

At the factory, lumber is protected from rain and changing temperatures, making floors less prone to warping and nails less likely to pop out as the wood dries. Zarrilli also points out that prefabricating avoids errors that can be made on a more chaotic work site.

“The joke is that Monday mornings and Friday afternoons are when carpenters are rushing or unfocused and make mistakes,” he says. “Our stuff is all made the same, on jigs in a factory.”

Most of all, he says modular saves time.

“The more you get done at the factory, the less time and money you spend on site.”

Zarrilli says modular homes are typically 12 to 15 percent less expensive than site-built homes and save three to four months on construction time. In the past, consumers have equated savings and time efficiency with an inferior product, but Zarrilli says that’s no longer the case.

His team joined two modular boxes and reinforced the seam between them with steel in the ceiling and floor. The result gave the room strength but offered more floor space than a traditional design.

“One of the reasons we’ve been successful is I don’t put limitations on what we build,” Zarrilli says.

He’s able to customize modular designs by applying his knowledge of traditional site building to new, modular processes. For instance, engineers initially told Zarrilli that large bump-out additions—which protrude from the side of the house—couldn’t be done modularly, to which Zarrilli responded, “Guys, you’re limiting what I can build.”

He then used a site-building method to design, build and attach the addition to the modular home, and reinforced it with sheetrock and wood. The result made the addition stronger than a site-built equivalent and gave it a higher wind rating than it needed.

“Other companies were asking us how they hell we did it,” he says. “Pretty soon they started to copy us.”

Zarrilli, who will build 40 homes this year, most of them modular, is so passionate about modular technology that he’ll take busloads of prospective clients on field trips to the factories.

Practices like this are part of Zarrilli’s larger goal to disabuse the public of its stigma against modular homes, an effort he also supports by participating in a national campaign with the Modular Home Builder’s Association.

Beyond its lower cost and durability, Zarrilli says his method of construction is inherently less wasteful. Scrap wood and even sawdust created at the factory is either sold or donated to companies that make quick-lighting fire logs. Excess sheetrock is used to reinforce areas behind walls and extra electrical strapping is recycled.

“Modular building is green building by default,” Zarrilli says, adding that the modular movement might do for houses what Henry Ford did for automobiles.

“Why do you think they made assembly lines for cars? It’s more efficient.”