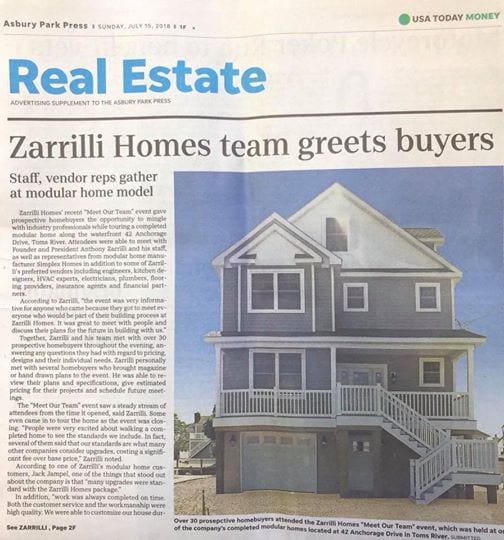 According to Zarrilli, “the event was very informative for anyone who came because they got to meet everyone who would be part of their building process at Zarrilli Homes. It was great to meet with people and discuss their plans for the future in building with us.”

Together, Zarrilli and his team met with over 30 prospective homebuyers throughout the evening, answering any questions they had with regard to pricing, designs and their individual needs. Zarrilli personally met with several homebuyers who brought magazine or hand drawn plans to the event. He was able to review their plans and specifications, give estimated pricing for their projects and schedule future meetings.

The “Meet Our Team” event saw a steady stream of attendees from the time it opened, said Zarrilli. Some even came in to tour the home as the event was closing. “People were very excited about walking a completed home to see the standards we include. In fact, several of them said that our standards are what many other companies consider upgrades, costing a significant fee over base price,” Zarrilli noted.

According to one of Zarrilli’s modular home customers, Jack Jampel, one of the things that stood out about the company is that “many upgrades were standard with the Zarrilli Homes package.”

In addition, “work was always completed on time. Both the customer service and the workmanship were high quality. We were able to customize our house during the planning process, which helped a lot,” said Jampel, who recommends Zarrilli as a reliable and reputable home builder.

Another customer, Camille Cantatore, purchased a modular home with her late husband after theirs was destroyed in Superstorm Sandy. Cantatore’s daughter, Suzanne Bimonte, who currently lives in the home with her mother, said that Zarrilli and his team made the process of rebuilding extremely easy for her elderly parents, from completing paperwork to obtaining the Certificate of Occupancy. She also noted that Zarrilli offered a number of helpful suggestions, such as handicap accessibility, and that work was always completed in a timely manner. “Zarrilli just made the whole process so easy for my parents. He even continued to follow up afterward,” Bimonte said. “I highly recommend Zarrilli Homes.”

According to Simplex Homes Sales Representative Peter Barbuti, the “Meet Our Team” event was very successful. “We’re proud to be a part of the Zarrilli team,” he said. “Anthony and everyone at Zarrilli Homes work closely to deliver customers the home of their dreams.”

“Not only are we both family-owned companies, but we also share common goals and business practices,” noted said Dave Mertz, Simplex Homes Vice President of Sales and Marketing. “The modular market has become very customized, and Zarrilli has set themselves up to meet the needs and expectations of their customers.”

Zarrilli Homes is proud to celebrate its 15th year building modular homes at the Jersey Shore. Throughout this time, Zarrilli Homes has been recognized by other industry professionals and clients as a leader in modular home building. After being a longtime member of the Modular Home Builders Association (MHBA), Zarrilli was elected to serve on the organization’s Board of Directors. The company was also awarded the MHBA’s 2014 and 2016 “Home of the Year” designation, as well as several “Home of the Month” designations. Zarrilli and his team have been featured on the popular television show This Old House and on multiple episodes of the DIY Network show Breakneck Builds, which highlights the advantages of modular home construction. Zarrilli Homes has also been voted “Best Modular Home Builder” of Monmouth and Ocean Counties in the Asbury Park Press Reader’s Choice Contest and has been acknowledged by numerous customers for being instrumental in helping homeowners rebuild since Superstorm Sandy.
The Zarrilli team is also excited to announce the addition of its newest member, Construction Project Manager Randy Scutro, who will be overseeing construction operations from demolition through Certificate of Occupancy on all projects. According to Zarrilli, Scutro’s attention to detail and commitment to customer satisfaction will play an integral role in providing customers with a positive experience throughout their home building process and beyond.
To find out about the next “Meet Our Team” event or to learn more about Zarrilli Homes, visit ZarrilliHomes.com or call 732-262-4848 to make an appointment to tour Zarrilli’s Design Center located at 186 Mantoloking Road in Brick.